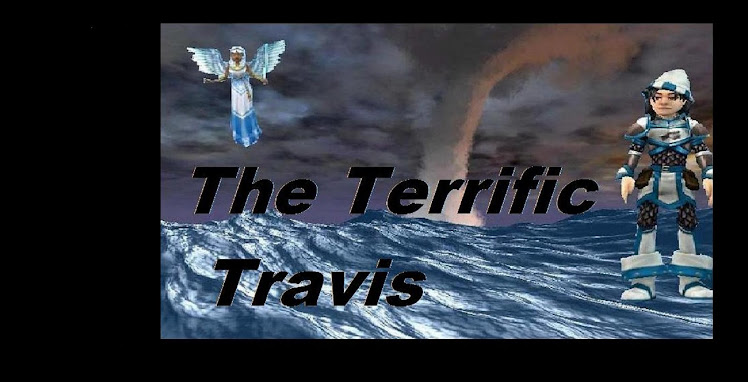 Posted by Travis emeraldspear at 8:01 PM No comments:

Hey guys, how have you all been doing battling monsters, fighting people, crafting clothes, making friends, having parties, getting that beast crown gear and making that perfect pet? Well, I only have done two of those! Recently, My family moved to Canada and since most people my age can have part-time jobs, I decided to give Wizzy another go. So I bought a month of sub and some crowns(2500) to go with it. I was determined to focus mainly on Hunter WinterBlood, my lvl 70 ice wizard, and get his buffed up (poor Travis Emeraldspear, I will have to set him aside for a little while(6-8 months).
Here is a pic of Hunter's stats: 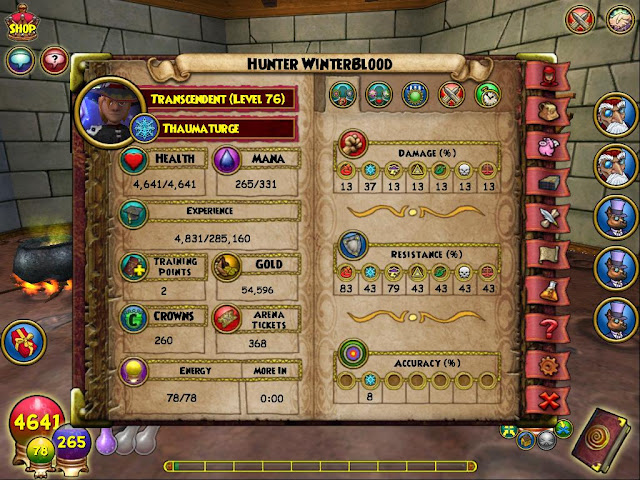 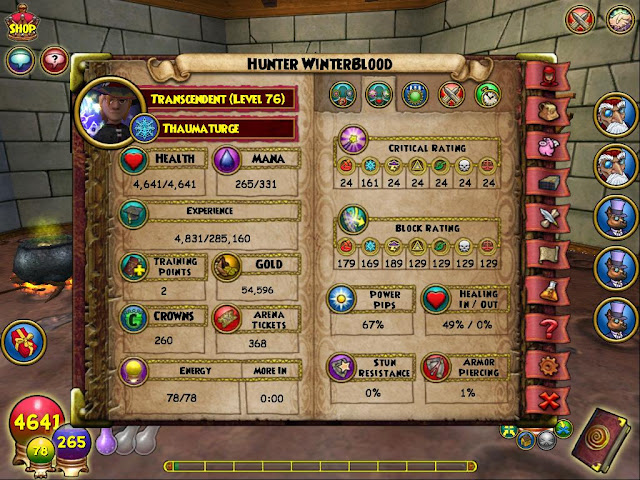 You can see Hunter's rank stats with that straight 700... 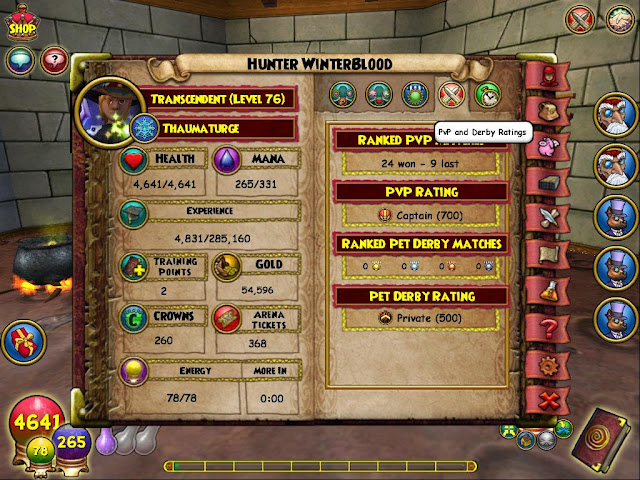 My pet, you ask? I'm sticking to this bad boy after it got one defense higher than my defender pig(13resistance) 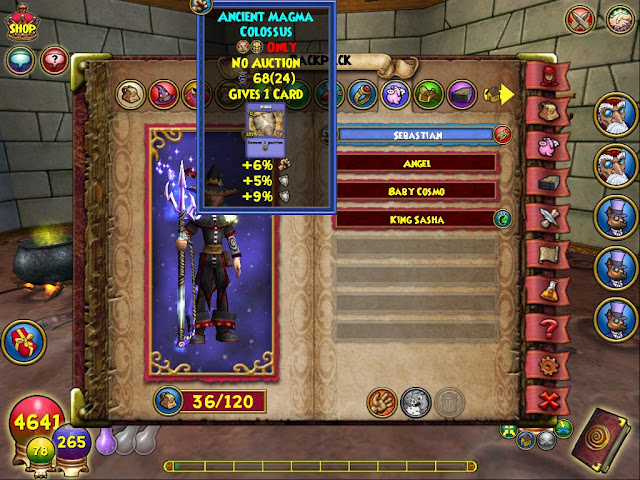 If you guys wanna say hi to this guy, you can probably find me either 1v1 ranking or 4v4 practice.
If you are Ice and want to know how to demolish people in rank, I am going to set up a quick tip for you guys(other schools, no peaking!)
You have to have a DoT(Damage over Time) spell. Without that, you cannot get rid of the towers and ice shields that they cast and they will cause you stress. I recommend Frostbite but Snow Angel works too. Then, you are gonna need a big hitter, Mammoth or whatever that new lvl 88 spell is called. You MUST have a staff, wand or sword that is not Ice, for they will cause trouble when they cast weakness or tower(especially those jujus!)
Just stack up and heal, but MOST IMPORTANTLY: CARRY DOOM AND GLOOM
You don't wanna waste that 3k hit mammoth and have them heal it off like lemonade on a hot day.

As always, Thanks for checking out my blog and stay tune for more news!
Posted by Travis emeraldspear at 8:53 PM No comments:

For the past following weeks, the course of Practice PvP has taken a wrong direction. People have been treating practice pvp as a game( you know what I'm talking about ). People have been fleeing when their team is going down, and say it doesn't matter or it's just a game. But, many people treat pvp as a fun game, and it IS fun when all players are present. So, Please, don't join unless your really up for a real battle. It could mean our friends coming back to the game to experience fun in pvp, not just fleeing noobs.
Posted by Travis emeraldspear at 11:16 AM 1 comment:

Hey Guys! Travis EmeraldSpear here, In this post I am going to show you my Ice, Hunter WinterBlood's Gear and Progress. I haven't done much crafting when it first came out, so when I started, I was a little bit behind. I did the Spirit Drums quest in two weeks (Whew) and eventually all those time farming for stone blocks for fossils paid off.
As you can see, Here is Lil' Ol' Hunter regaining health from a previous boss fight. 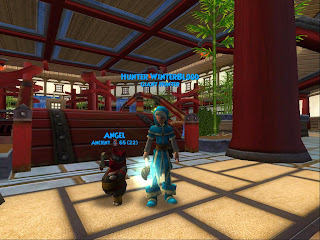 Here are the stats containing the Crafted Zafaria Stuffs... 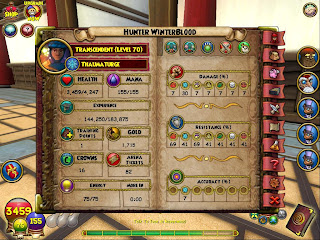 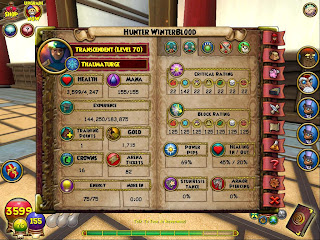 Here is my ranked status. I wanna talk more about this since I got matched with a consecutive warlord fights when I first began ranked. They were a little bit lower than my level but I think its a little unfair though. Has any of this happened to you guys? 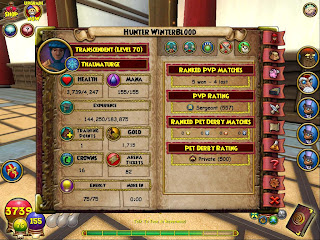 Here is my 4v4 Spell Deck, I don't use much treasures because I do practice now. My last ranked match was a month ago and I had no crafted gear. I copied this spell deck from my friend which is warlord, so I knew this will take me to great heights. Feel free to copy my spell cards for any Ice Brothers out there Reading! 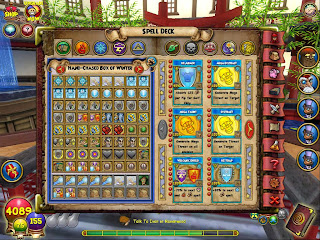 And this is my 1v1 deck. As my friend said, When your ice and you do 1v1 ranked, you just copy this spell deck. Basically the strategy is you blade, bubble, frostbite then mammoth. Be sure to have reshuffle because it is beast. I dont use elemental since the enemy will know you will go Blade-Rampage on them and might enfeeble or earth you. 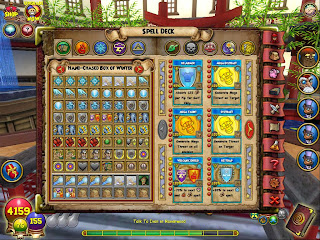 Now we are up on the Spirit Drums Tips. Basically you have to craft 4 conga drums for 2 spirit drums. Really hard when you dont have the ingredients already. I admit I was stuck on it and gave up, but when I discovered that I almost got the reagents, I figured I could finish it.
You need a lot of fossils. Farm them in bazaar OR get stone blocks from Atheneum-next to the rose area or Nidavellir.
Sunstones or Sandstones in bazaar. Easier to get sandstones since Sunstones disappear in like 5 seconds lol
Aether, Black pearls, and Golden Pearls in Portico. Every trip there guarantees a double Kelp ( sometimes aether) and Pearls ( sometimes black pearls, and transmutes to golden pearls.)
Well thats about all the hard stuff the Spirit Drums Quest has to offer to us. For those to want to meet me, I will be doing 4v4practicepvp on my ice, Hunter WinterBlood. Greet me and my friends while your there :)

Posted by Travis emeraldspear at 2:10 AM No comments:

Yo sup, guys? It's been another long while since I've posted. I just wanted to let you guys know that Hunter has reached level 58 and can cast Snow Angel today! Remember that lvl 18 ice guy? Well I got only one month of sub and it looks like I'm making progress. Hunter has 50 resistance overall, 28 damage, sergeant badge, Cosmic kris and Stellar Signet, and my Defender pig from Travis. I'm still adjusting to the whole point that Storm has Stronger attacks, but with the time I have, I can stack up blades for a big Angel. I just wanna thank the people that keep visiting my blog. You guys are awesome! Pictures coming Soon!
Posted by Travis emeraldspear at 7:05 AM 1 comment:

I was strolling in the hatchery and look what I saw! 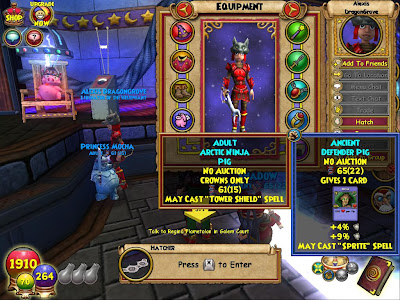 I believe that this pet is a combination of an Arctic Cat and a Defender Pig. Hmm, Any guess?
Posted by Travis emeraldspear at 12:30 AM 3 comments:

Back from a 5 month break!

I know I have not posted in a very long while, let's see if I still have the juice. Ok, so I have been working on an Ice character lately and not to pat myself on the back but I didnt pretty good 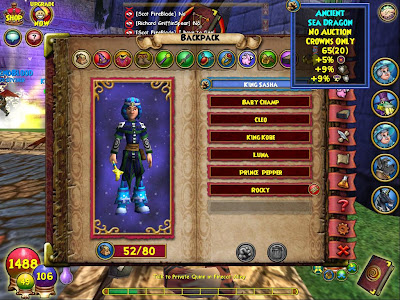 As you can see, I traded my Sea Dragon I leveled up on Travis. 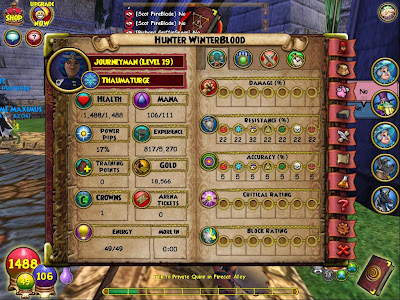 So this is what you'll see if you look at my stats. Heartsteel, which you can buy as a crowns item in the WC athame shop, is involved here.
Travis hasn't got his Waterworks gear yet. I am a bit behind right now. I have 1 crown, no Subscription. It's really hard for me to get subscription. You can usually see me in a 4v4 at the pvp arena battling my way out of boredom. Any Donations? hahaha...
Well, I guess you already heard about Zafaria. 70 level cap. New level 68 spell. New gear. New pets?
Well by the time I get my Waterworks gear, Zafaria should already come out already and Waterworks should be like Briskbreeze now.
Shouldn't the Frankenstein spell look more death than storm? I guess allot of people thought about that. Well here's the story-Frankenstein is Death. Remember him coming back to life and you see him on halloween? hahah, I guess I'll leave it for you guys to think about it.
Posted by Travis emeraldspear at 6:01 PM No comments: